The River's Liver but not Dinner
Unlike saltwater mussels, they aren't delicious and don't reproduce from spat on a rope. In fact, freshwater mussels (kākahi or kāeo in Māori) are physiologically cold-blooded parasites. Their threatened status in New Zealand is of concern because mussels help filter contaminants from our waterways and store them for slow-release: like a sucker buffer. However, sparse knowledge of their intricate life-cycle and juvenile habitat hinder targeted conservation action. 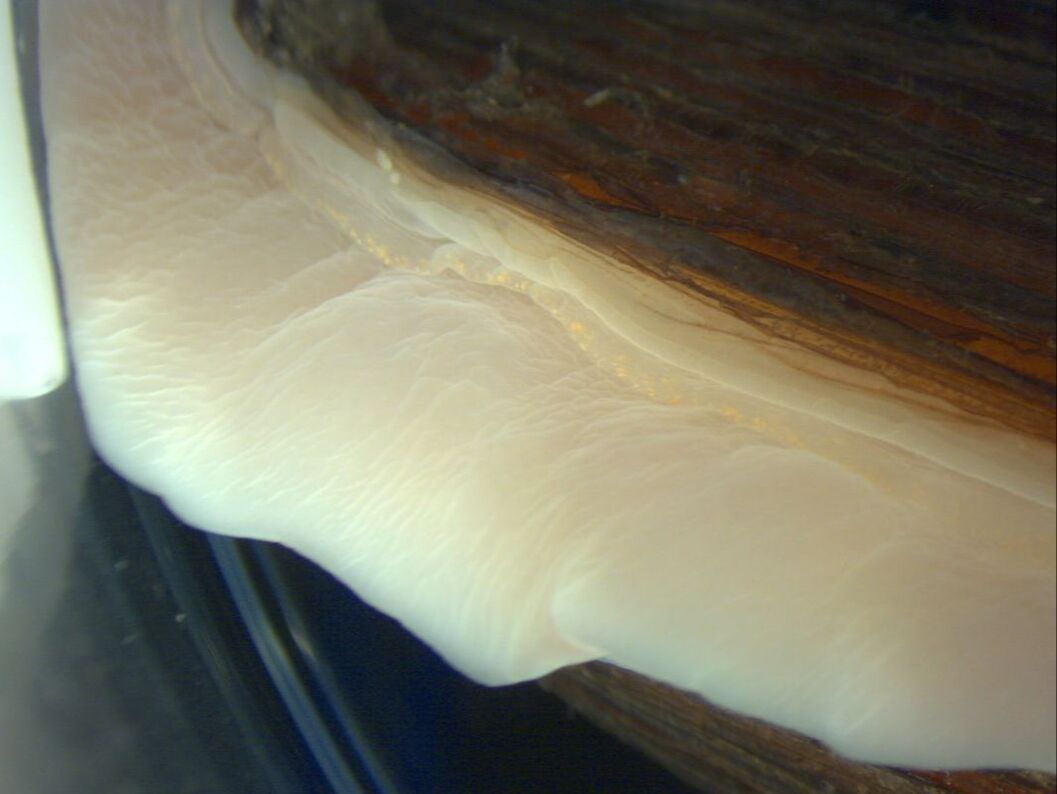 Adult mussel (Echyridella menziesii​)
The life-cycle of freshwater mussels is a curiosity: we know adults of Echyridella menziesii release thousands of larvae (glochidia) that resemble pacman-vampires to drift in the water column, as well as on mucus 'fishing lines' that rise up from their siphons. Upon contact, glochidia snap shut on unsuspecting fish-hosts, ideally on the fins, gills, or operculum. Attachment is the first hurdle for mussel reproduction, but are all fish suitable? How about non-native species, or in the absence of natives, are freshwater mussels up fish creek without apt tackle?
On suitable native fish-hosts such as the common bully (toitoi), glochidia encyst, assimilate nutrients, and detach as juveniles mostly within a fortnight. Warmer laboratory conditions expedite this process and can produce over 100 juveniles per bully and transform up to 80% of those attached. Although not representative of real-world conditions, successful transformation on fish-hosts in trials demonstrates the second hurdle, which is the consequence of a mussel and native fish 'arms-race' carried out over an evolutionary time-scale.

On the other hand, non-native species are new players to the host-fish game, and as you may expect, are inexperienced. Our research found non-native brown bullhead catfish, rudd, and goldfish (morihana) transformed less than 1% of initially attached glochidia: undoubtably an ineffectual invasion of mussel privacy. 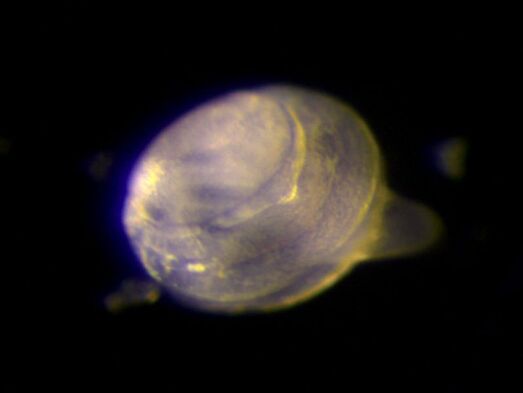 Two-day old juvenile mussel (Echyridella menziesii​)
The third hurdle spans a coming-of-age story from juvenile to adult. Behavioural habitat preferences of fish-hosts determine the location where juveniles are deposited. Affluent neighbourhoods offer prosperity in food resources that juveniles can pedal feed using their muscular foot, and life-sustaining sediments supportive of the healthy homes act. Unfortunately, if the host-fish dispersal lottery is unfavourable, juveniles may be stuck with lamentable landlords in the form of dense non-native aquatic weeds (macrophytes). Here, juveniles can be exposed to hypoxic and anoxic conditions that occur diurnally overnight during summer, as well as high sediment ammonia concentrations and smothering sediments. 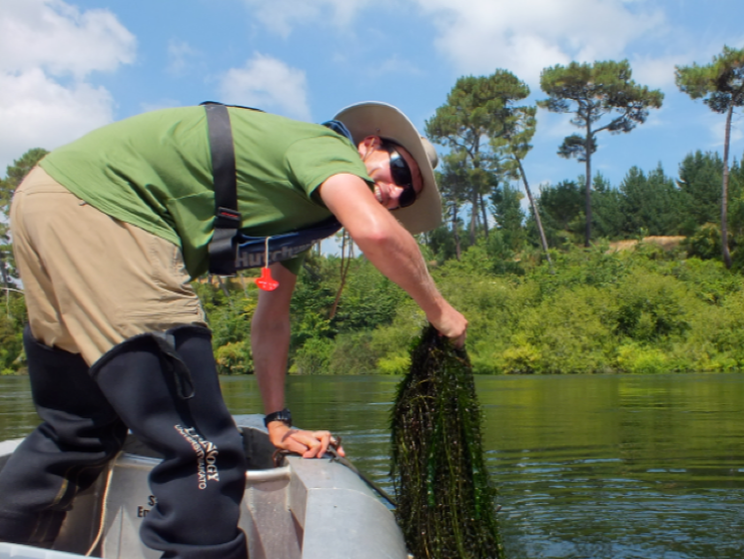 Tom wrangling a macrophyte (Egeria densa)
​Our research has shown these adverse oxygen conditions produced by macrophytes are context-dependent based on the management of hydrogeneration reservoir flow regimes. However, establishing causation between the lower numbers of juvenile mussels and adverse macrophyte conditions in some situations requires further investigation. In other words, there may be a freshwater mussel housing crisis, but we don't know if mussels should go with the flow or appeal to the tenancy tribunal with current knowledge. 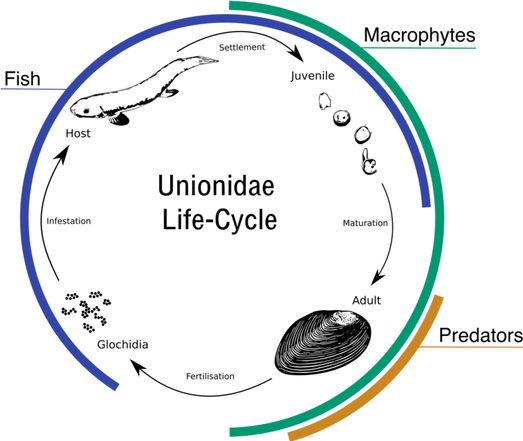 Adapted from Moore, Collier, & Duggan, 2019.
Above is a summary of the mussel life-cycle, with parts particularly threatened by non-native species displayed. The unmentioned non-native predators are predicted to consume mussels opportunistically. Although, predation rates are likely to be higher when mussels are exposed during droughts or after floods if washed onto the bank. Check out Bridgette Farnworth's work for the most up-to-date advancements on this threat.

In conclusion, freshwater mussels are sucker buffers important to conserve in-part due to their positive effect on water quality and ecosystem health. My PhD thesis and scientific publications have gone some way to understand the impact non-native species have on mussels. However, there is still plenty of fertile ground for future research, particularly in their fundamental ecology such as: where do threatened mussel populations exist, are other non-native fish suitable as mussel hosts, what are the mechanistic underpinnings of juvenile survival, and how does ​Echyridella menziesii reproduction compare to other New Zealand mussel species (see Michele Melchior's work on Echyridella aucklandica).